Fully tested VIP can be leveraged in virtual networking scenarios and across all network stack layers and protocols, accelerating verification closure
Key Takeaways

Virtual network co-simulation solution is the latest extension of Avery's virtual platform co-simulation/co-emulation strategy for next generation pre-silicon validation of interfaces in system-level environments. With its approach, virtual platform co-simulation virtualizes host or embedded devices such as PCIe, CXL, AMBA, and now Ethernet interfaces, so verification can be performed under actual operational conditions, including verification of software integration.

This comes on the heels of other news from Avery Design Systems this week including support for CXL 3.0 and that its NVMe, PCIe, and AXI VIP have been adopted by TenaFe for new solid state storage controllers.

"Leveraging the bandwidth and performance of Ethernet has become increasingly important in a range of data transfer intensive applications and time-to-market is a major concern for product developers. Performing full hardware/software, system-level verification of DPUs, SmartNICs, switches, and routers can be accelerated by weeks to months using virtual network co-simulation. With this solution, any host OS or guest OS (VM) user space program or Linux network utility can communicate with SoC RTL/FW via Avery's SystemVerilog MAC/PHY virtual NIC VIP,” said Chris Browy, vice president of sales and marketing at Avery.

Examples of real programs or utilities supported include:

The virtual network device can be viewed as a simple Ethernet device, which instead of receiving packets from a physical media (Ethernet NIC), receives them from the Ethernet MAC/PHY RX VIP which passes them up to the OS network stack. The Ethernet MAC/PHY VIP is connected to the SoC design's interfaces that are both part of the SystemVerilog simulation testbench.

Conversely, instead of the OS network stack sending packets via physical media they get sent through the Ethernet MAC/PHY VIP towards the SoC design's ethernet RX interfaces. 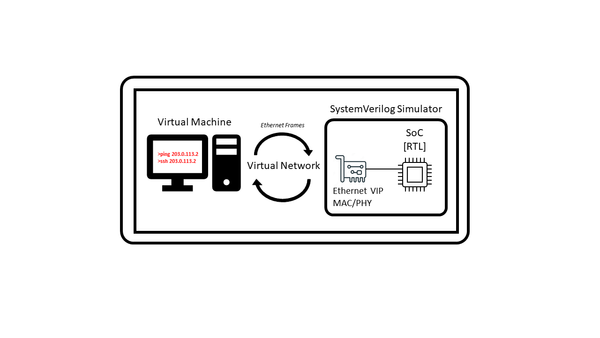